Most Louisiana Drug Overdose Deaths Occur in These 5 Parishes

The country is facing a national overdose crisis that shows no signs of stopping any time soon. The real impact of the crisis that is capturing national headlines can be seen in the rising numbers of overdoses in 5 small Louisiana parishes. 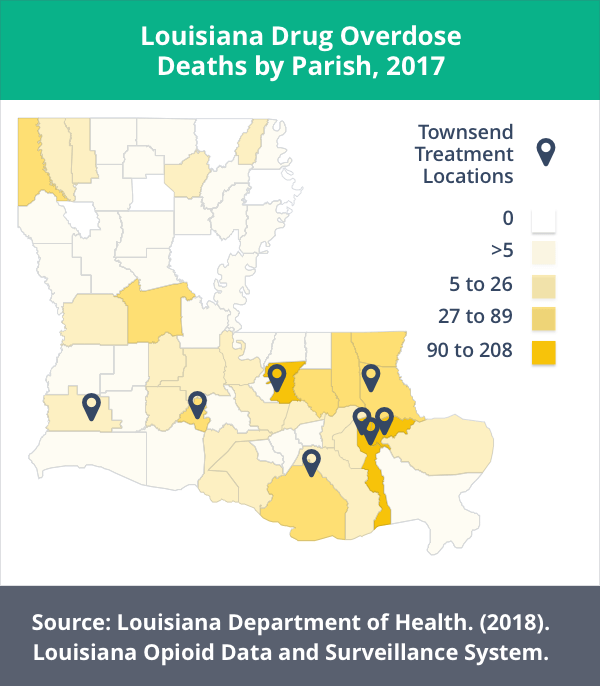 With 52 overdoses in 2017, Lafayette had the 5th highest number of overdoses among parishes in the state that year.1 Recently, Lafayette experienced an extreme increase in the number of fentanyl poisonings. Fentanyl is a powerful opioid—up to 100 times stronger than morphine. In 2016, in the first 113 days of the calendar year, Lafayette emergency rooms treated 130 cases of fentanyl drug poisonings, averaging out to a little more than 1 overdose per day.2

Compared to other parishes, St. Tammany residents report a higher median income than others, making the case that addiction and overdose affect people from every socioeconomic background. With the 4th highest rate among parishes in the state at 80 overdoses, it’s clear that substance abuse is not confined to any one income bracket or social status.1

East Baton Rouge Parish, which saw 109 overdoses in 2017, has a large veteran population, which may contribute to higher levels of substance abuse.1 Research consistently demonstrates a strong correlation between veteran substance abuse, mental health issues such as depression, and suicide.3

Jefferson had the 2nd highest number of drug overdoses in the state in 2017, with 180. It also had the highest number of opioid-involved deaths of the parishes in the state. An opioid-involved death refers to a death where a person is found with opioids in their body at the time they died. For example, the toxicology report for a person admitted to the emergency room primarily for alcohol poisoning may show they also had codeine in their system. The combination of alcohol and opioids results is a greater overdose risk, and unfortunately these drugs are commonly abused together.

New Orleans is a party destination for most of the country. Every year, thousands of tourists flock to Bourbon Street to join the festivities. The city runs off of cocktails made with brandy, gin, and absinthe. All-night partying combined with heavy drinking and substance abuse land Orleans at the top of the list of parishes with the highest number of drug poisoning deaths.

Where Do We Go from Here?

These numbers represent lives and families that have been torn apart by the cycle of addiction. Thanks to emerging research and the expansion of mental health and substance abuse programs, there are more resources and awareness than ever before to help addicted individuals find help.

No one wants to get the call that it’s been too late. If you are a concerned loved one, it may be time to intervene and talk to your friend, partner, wife, husband, child, or coworker about their substance use before it begins to spiral even further out of control.