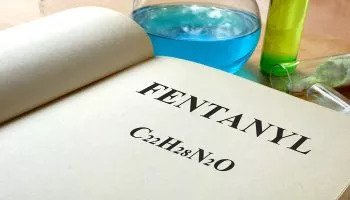 Fentanyl is marketed licitly in four main formulations: transdermal patch (Duragesic), buccal tablets (Fentora), transmucosal lozenges or “lollipops” (Actiq), and injectable forms. It is a Schedule II controlled substance by the Drug Enforcement Administration (DEA). It is considered to be highly addictive and regularly diverted from licit channels to be abused, and it is even manufactured in clandestine laboratories.

Similar to but 50-100 times more potent than morphine, fentanyl is a synthetic opioid, which means it is man-made, the National Institute on Drug Abuse (NIDA) publishes. It is designed to treat acute pain, chronic pain,  breakthrough pain, or pain in individuals already tolerant on other opioids. As a central nervous system depressant, fentanyl binds with opioid receptors in the brain, blocking pain sensations, reducing anxiety, and lowering respiration levels as well as body temperature, blood pressure, and heart rate. It also increases levels of dopamine in the brain, creating a rush of pleasure, or “high.”

Abuse of fentanyl is widespread and increasing. Drug seizures testing positive in United States forensic labs for fentanyl spiked to nearly 6,000 in the first six months of 2015, up from only 1,000 in 2013, the Wall Street Journal (WSJ) reports. It is sometimes used as a substitute for heroin, as it may produce a similar mellowing and euphoric high.

Fentanyl may be injected, snorted, smoked, or swallowed, and patches may be frozen, cut up, sucked on, inserted into bodily orifices, or the gel can be scraped off and smoked or injected. It may also be laced with heroin when abused. Fentanyl is known by a variety of names on the street, such as TNT, jackpot, murder 8, tango and cash, apache, goodfella, China white, dance fever, China girl, and friend.

Individuals may start out with a legitimate need and prescription for the drug and become hooked on it, as tolerance to the drug may quickly be formed. Once someone is tolerant to fentanyl, they will want to take more of the drug to feel its effects, and physical dependence may soon follow. According to the 2014 National Survey on Drug Use and Health (NSDUH), more than 4 million Americans (aged 12 and older) were abusing prescription painkillers at the time of the survey, the majority of which were between the ages of 18 and 25.

Taking fentanyl outside of a prescription can cause a person to feel drowsy and relaxed; have less muscle control and motor coordination; be less inhibited and more social; and have diminished decision-making and concentration abilities. Individuals on fentanyl may take bigger risks without regard to potential consequences, possibly leading to accidents or injuries. Fentanyl can cause short-term lapses in memory, making people under the influence a potential target for sexual assault.

Perhaps the biggest risk factor in taking fentanyl recreationally, or for nonmedical purposes, is the potential for a fatal overdose. Opioid drugs accounted for six out of every 10 of the 47,055 drug overdose deaths in the United States in 2014, the Centers for Disease Control and Prevention (CDC) reports. Synthetic opioid overdose fatalities, including drugs like fentanyl, more than doubled from 2013 to 2014, the CDC further publishes. The Drug Abuse Warning Network (DAWN) publishes that in 2011, more than 20,000 people were treated in an emergency department (ED) in the United States for the nonmedical use of fentanyl.

Fentanyl is so dangerous due to its potency and also because it is often either mixed with, or sold as, heroin, even though it is much more powerful. When bought on the street or online, individuals may never be sure what they are buying and what the actual dosage is, increasing the dangers and the potential for a tragic end result. Additionally, if an extended-release version of fentanyl, like Duragesic, is altered and abused, the entire dosage is released at once instead of slowly over a period of a few days.

“This can be highly dangerous and easily overwhelm the body, causing an overdose, per the labeling information published by the US Food and Drug Administration (FDA).

Fentanyl, like other opioid drugs, slows down autonomic functions like, breathing, pulse, and blood pressure, and when a person overdoses, they may  stop breathing altogether. Shallow breathing, cold skin, weak pulse, pinpoint pupils, mental confusion, and a possible loss of consciousness are all signs of an opioid overdose, which requires immediate medical attention.

Some warning signs that a loved one may be abusing fentanyl include:

When someone takes fentanyl, a kind of shortcut to feeling pleasure is formed in the brain. With regular use of the drug, this new pathway to reward becomes more fixed, as brain chemistry and even circuitry are altered. When the drug isn’t present and active in the brain then, a person may have difficulty feeling pleasure through normal means. Chemical and physical dependence may be formed as the brain expects the presence of fentanyl to keep working “normally.”

Impulse control and the ability to regulate emotions and make sound decisions may then be negatively affected as the desire to continue taking fentanyl may outweigh all other thoughts.

” Loss of control over taking fentanyl may be a side effect that then leads to addiction.

The American Society of Addiction Medicine (ASAM) states that addiction is a brain disease affecting the brain’s chemical makeup and function that thereby impacts memory, moods, behaviors, and actions. ASAM reports that in 2014, nearly 2 million individuals in the United States who were at least 12 years old suffered from an addiction involving a prescription opioid pain reliever such as fentanyl.

Physical dependence can occur outside of addiction. When someone is physically dependent on fentanyl, they will suffer from withdrawal symptoms when the drug wears off, in around 12 hours to a day or so, depending on the method and formulation of the drug taken. Withdrawal can be intense, as the brain rebounds from the effects of fentanyl. Emotionally, individuals may feel depressed, anxious, irritable, restless, and agitated, while physically, opioid withdrawal is like a bad case of the flu. Drug cravings, physical discomfort, and an inability to think straight may make it particularly difficult to stop taking fentanyl once dependence has formed.

Aside from physical dependence, many behavioral changes accompany an addiction involving fentanyl. Individuals may be less motivated to attend school or work, and a decline in production and output may result. Regular duties and obligations may be shirked, and individuals may spend most of their time figuring out how to get fentanyl, using it, and then coming down from its effects. Other social activities may be less important, and isolation and withdrawal from family and friends are common.

When someone battles addiction, they continue to abuse drugs even though they may be fully aware of the consequences, and they may use them in hazardous or dangerous situations. Financial and legal troubles, loss of employment, and homelessness are all possible side effects of an addiction involving fentanyl.

Withdrawal is optimally managed with both supportive and pharmacological methods during medical detox. Medical detox provides mental health and medical care and supervision while the drug’s toxins are processed out of the body. Lasting 5-7 days on average, medical detox is provided in a safe, quiet, and calm environment where individuals are given around-the-clock encouragement, support, and medications when necessary. Fentanyl is often substituted with another, and longer-acting, opioid drug during detox, such as methadone or a buprenorphine product. Then, this long-acting opioid can be slowly weaned off over a set amount of time to prevent withdrawal symptoms and drug cravings from becoming as intense. Other medications can also be beneficial during medical detox to control specific withdrawal symptoms and help individuals to achieve physical stability before entering into an addiction treatment program.

Addiction treatment is complex and highly individual. Most programs include therapeutic and supportive methods, with both group and individual counseling and therapy sessions playing an integral role. Behavioral therapies help individuals to learn how to cope with stress, control anger, communicate better, and improve self-esteem while learning new life skills and how to manage triggers and cravings. Holistic methods can also help with this, as massage therapy, mindfulness meditation, yoga, and fitness programs aid in strengthening the connection between mind, body, and spirit.

Support groups are often part of a treatment program that can provide people with a healthy outlet to share what they are going through as well as hope for the future and relapse prevention tips. These groups are peer-led and often follow a 12-Step model with the only requirement being a desire to achieve and maintain sobriety.

NIDA reports that treatment for addiction should be at least 90 days in duration, whether residential or outpatient. An outpatient program may provide the flexibility a person may require, while inpatient or residential programs are generally more comprehensive and offer a wider range of services. Recovery is personal and no two treatment programs work exactly the same way. Highly trained professionals can help to design and implement a treatment plan tailored to the individual to achieve and sustain long-term recovery.

Can You Overdose from Fentanyl; What Can Be Done to Prevent It?