What Are the Stages of Drug Addiction?

Addiction is a disease, as classified by the American Society of Addiction Medicine (ASAM), that impacts not only brain chemistry but also behaviors, emotions, and thoughts.

It is pervasive and can invade every part of a person’s life. It is also chronic, relapsing, and progressive, meaning that it gets worse over time.

Drug addiction is a highly personal disease that almost 7.5 million adults in the United States struggled with in 2016, per the National Survey on Drug Use and Health (NSDUH). Addiction begins with drug abuse then moves to physical drug dependence and then into addiction. How an individual goes through these stages may be different from person to person. Things such as biology, genetics, the presence of co-occurring disorders, the type of drugs used, how they are abused, and environmental factors all play a role in the progression of addiction.

While the stages of addiction may not look exactly the same for every single person, they will follow a similar pattern in general. Drug addiction is a treatable disease, and with professional help, it can be managed.

Any use of an illicit drug is considered abuse, just as misuse of prescription medications is abuse. Almost 30 million Americans were classified as currently abusing drugs at the time of the 2016 NSDUH. Drugs of abuse include cocaine, marijuana, heroin, methamphetamine, ecstasy, hallucinogens, inhalants, prescription medications (such as painkillers, sedatives, and stimulants), and over-the-counter (OTC) medications, including cough syrup and cold medicine.

Prescription and OTC drug abuse often begins with licit use. An individual may start out taking a pain medication after surgery and then begin to use it in between doses, in higher amounts, in ways it is not directed to be used (e.g., chewing tablets or crushing and smoking, snorting, or injecting them), or after the prescription has run out. Misusing a prescription or OTC drug is abuse, however, and using these medications without a legitimate medical need is cause for concern.

The first stage of drug abuse is often called initiation, which is when drug use begins. A person may initiate drug use out of curiosity, due to peer pressure, or because they are young and the part of the brain that manages impulses and the understanding of consequences isn’t fully developed yet. The earlier a person starts using the drugs, the more issues they are likely to have later in life, including an increased risk for addiction as an adult, the Substance Abuse and Mental Health Services Administration (SAMHSA) warns.

Drugs are often abused because of the “high” these mind-altering chemicals can produce. When someone snorts, injects, swallows, or smokes a psychoactive drug, brain chemistry is changed. Levels of some of the chemical messengers that help to regulate feelings and emotions, such as dopamine, are changed. A person may then be more social, less inhibited, have less willpower, and therefore take bigger risks when drugs are introduced.

After initiation, drug use can move one to being experimental, wherein a person uses drugs at parties, to unwind with friends, or primarily in social situations. The next stage of drug use is then regular use; drug use may not occur every day but it is more frequent than just in social situations. A person may start using drugs when they are alone or as a way to manage stress, self-medicate emotional distress or mental illness, or escape reality. Drug abuse becomes problematic, and the next stage is risky use, which is when various problems related to drug abuse begin to crop up.

abuse can be incredibly dangerous. Many of these substances that are abused are addictive, and regular abuse can cause a person to become tolerant and then dependent on them. Alterations in the brain’s reward pathway caused by drug abuse can be a precursor to addiction, the National Institute on Drug Abuse (NIDA) warns.

Drug tolerance often precedes physical dependence on a substance. When a person takes drugs on a regular basis, the brain can get used to the way the drugs interact in its system. As the brain tries to regulate its chemical makeup, a person can become tolerant to certain levels of drugs. This will mean that they will then need to take higher doses and more drugs, potentially even more often, in order to keep feeling the desired effects. The high will not be as intense with the same amount of drugs as before; therefore, a person will likely begin to take more each time, building up their tolerance.

In time and with perpetuated drug abuse, the chemical wiring, circuitry, and makeup of the brain can actually be changed by drugs.  The brain then expects and relies on the way that the drugs interact in its system, altering the level of natural chemical messengers and the way they are moved around the brain, impacting and changing the reward pathway.

Physical dependence is formed, which is the next stage in drug abuse and addiction. When a person is dependent on a drug, they will likely suffer from withdrawal symptoms when it isn’t active in the bloodstream. Withdrawal symptoms can be both emotionally and physically difficult. They may include:

Drug dependence can vary in its severity, depending on what drugs are abused, how they are abused, how long they have been abused, and biological, environmental, and genetic factors. For example, if someone abuses a highly addictive drug like heroin by injection, takes a lot of it with each dose, and has been doing so for a long time, they are probably significantly dependent on the opioid drug and will struggle with intense withdrawal symptoms if the drug use is suddenly stopped.

Drug cravings can also accompany drug withdrawal and make a person want to continue using drugs. A person may not feel “balanced” without the drugs after physical dependence has formed and may think they need to keep taking them in order to feel normal. Physical dependence is the result of the chemical changes drugs make to levels of neurotransmitters (chemical messengers) and how they are transmitted, absorbed, and produced in the brain. It is often a sign of addiction and generally comes first.

A person can be dependent on a drug and not addicted to it. Addiction is a behavioral disease and not just a disorder affecting brain chemistry.

Addiction is not only a disease impacting brain chemistry and wiring but also one that causes a person to struggle with compulsive drug use and drug-seeking behaviors. Someone who struggles with addiction will not be able to control their drug abuse even if they want to.

The most current Diagnostic and Statistical Manual of Mental Disorders, the DSM 5 lists 11 criteria for a substance use disorder, or addiction. NIDA reports that any person who suffers from any two of the following in a 12-month period can be diagnosed with the disease of addiction:

When someone struggles with addiction, it is likely that many different parts of their life will be negatively impacted. Finances can become strained, legal and/or criminal issues may crop up, relationships suffer, and they may lose their job and/or their home as a result of chronic drug abuse and addiction.

Drug use can cause and exacerbate a wide range of health problems and emotional strain. Personal hygiene and physical appearance may suffer, and mood swings are common. Secrecy, isolation, and changes in social circles are additional common signs of addiction. Someone battling addiction may even undergo a complete personality shift and not seem like the same person they were before.

Addiction is progressive. The longer a person continues to use drugs unchecked, the more significant the disease will become.

When to Seek Help for Drug Abuse and Addiction 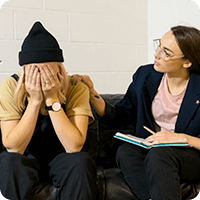 who is in the early stages of drug abuse (initiation and experimentation) will not have as many potential risks and side effects of someone who is engaging in risky use, physically dependent, or battling addiction. It may be easier to talk to someone about their drug use early on and prevent the progression of addiction before physical dependence sets in. The earlier a person gets help for drug abuse and addiction, the better.

Addiction treatment can help to stall the progression of the disease and keep it from getting worse. Once dependence is present, detox is often the first line of treatment to help a person become physically stable. After detox, a comprehensive addiction treatment program is optimal. Through behavioral therapies and counseling sessions, a person can learn how to manage stress, work though potential triggers, deal with drug cravings, and minimize episodes of relapse.

Illicit drug abuse and misuse of prescription and/or OTC drugs can quickly devolve into drug dependence and then addiction, so early intervention is key. A person does not need to hit “rock bottom” in order to get help for drug abuse and addiction. There are many different types and levels of substance abuse treatment programs and services open to people struggling with all different stages of addiction.